Of all the courses I offer, right now the most popular – and dare I say it most successful – is the Secrets of a Six-Figure Lead Generation Consultant course. For those of you who don’t know, it’s an intense – but self-paced – journey through the techniques and blueprints I have used to build Pearl Lemon, my ‘six-figure agency’.

When dealing with online courses of any kind – especially those that cost money – people naturally want a little bit – or a lot – of information and reassurance about what might make it worth the investment. Understandable. They also like to hear from people who have already taken the course so they can see whether or not it actually works. Also, hugely understandable. I’d worry about someone who was not this cautious. No one likes to waste money, especially me.

So today I wanted to share a few case studies, the experiences of a few of the students who have worked their way through the Six Figure Agency Secrets Course already and are out there putting what they have learned into (major) action.

Benjamin – Ben – is a great guy from Cardiff who was one of the first guys to contact me with questions about the course soon after it was launched: 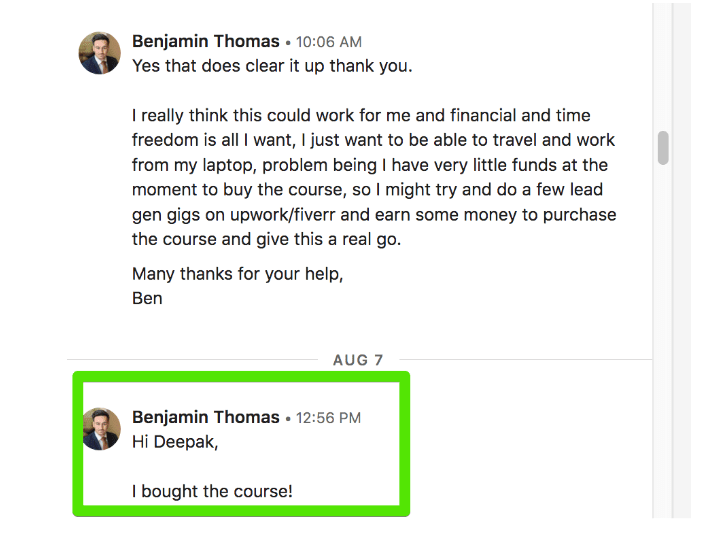 Not going to lie either, this was exciting for me, as this was a chance to help someone who was basically in the same position as I was not too long ago.

So Benjamin started the course – while still working, as that is the way the course is set up, you can follow it at your own pace and revisit it as and when you need to, even long after you’ve been through the first time.

Just a couple of weeks in, Benjamin had created – and sent – the email templates I suggested, and was getting results. And not too long ago, he updated me on just how he’s doing right now: 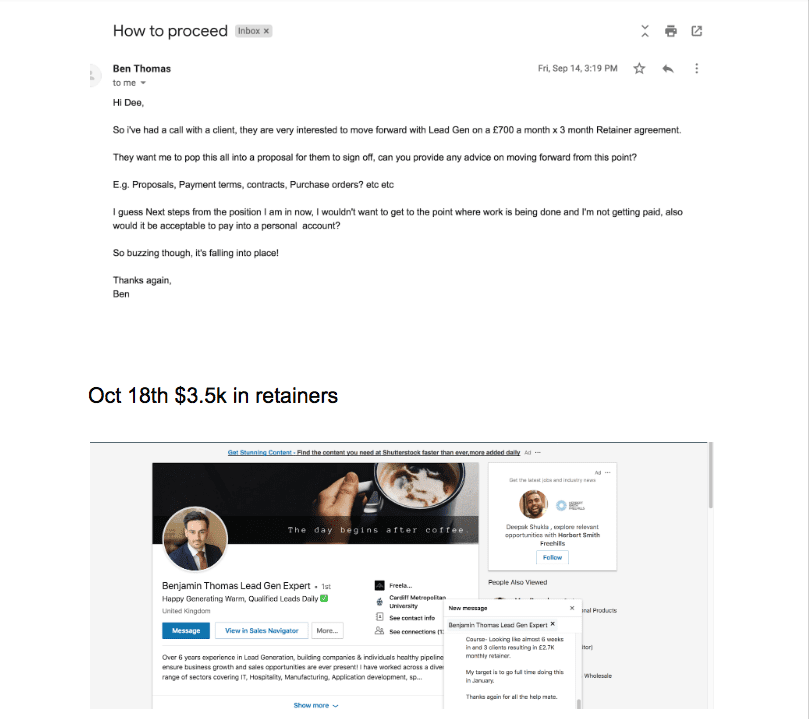 And made this great video.

I’m really looking forward to watching Ben as he moves on, especially as he reminds me a lot of myself!

Luke’s a special dude. He actually turned down a professional football contract to follow his business dreams instead. So trust me, this was a big deal for me too, as he was putting his faith in me to help him.

But I’ll let him tell his own story

These were his initial reactions a few weeks into the course, which were, I was delighted to hear, very positive

Even better, as we were communicating, things were starting to look really good for Luke 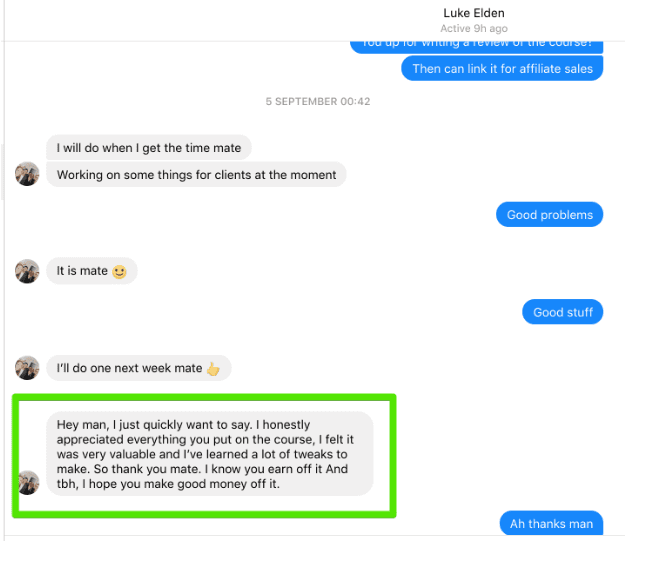 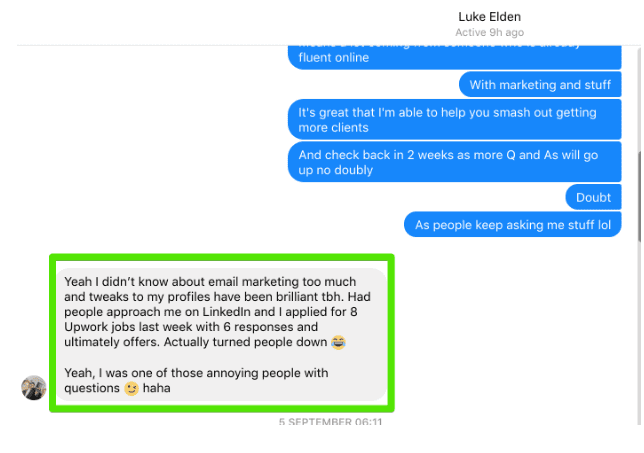 Luke’s smashing it and even turning clients down. This is a dude to watch, mark my words.

Oli is another ‘Deepak Success Story’ I’m particularly proud of. This guy is a grafter. He’s married, he had his own mobile food truck business and, because he needed to ramp his income had also just opened a social media marketing business. He needed leads because financial concerns became even more pressing when he and his wife discovered Baby #2 was on the way. Still, he did his due diligence before he signed up (see below) And just so you know, I have no problems receiving and answering emails like these. Because I totally understand them.

Don’t take offence to this question I’m just curious and as you say its hard to pick the legitimate mentors and the Fake “Gurus”.

I am most likely to join your program but I’m wondering that if your program is so easy to adopt and make quick returns why don’t your staff do the same and start up their own company?

I answered. We talked. He even talked to a couple of my staff. He signed up. And there were issues along the way. Upwork can be a great place for someone like Oli to find great clients, but it can also be tough to break into without a certain amount of solid, verifiable experience. A lot tougher than it was just a few years ago. But we worked our way through that: 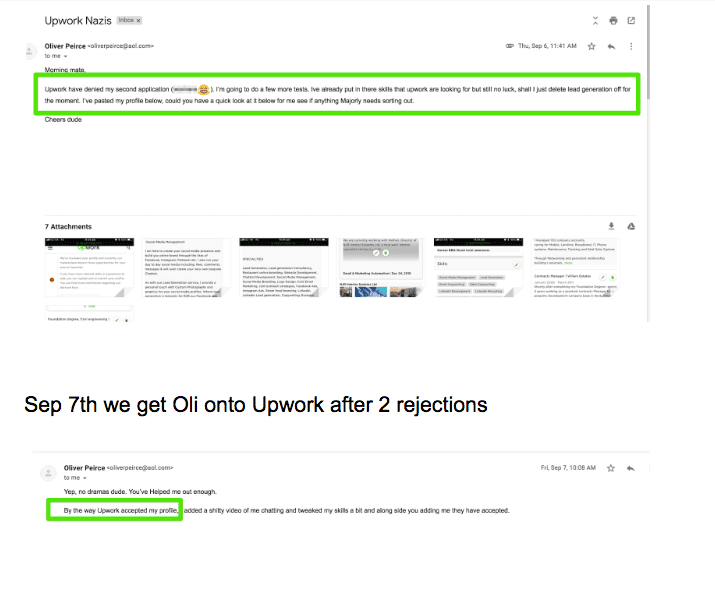 And not only is he doing well personally, but he’s also even been offering advice and guidance to others in the private Facebook group that my course students interact in. WHAT A DUDE. 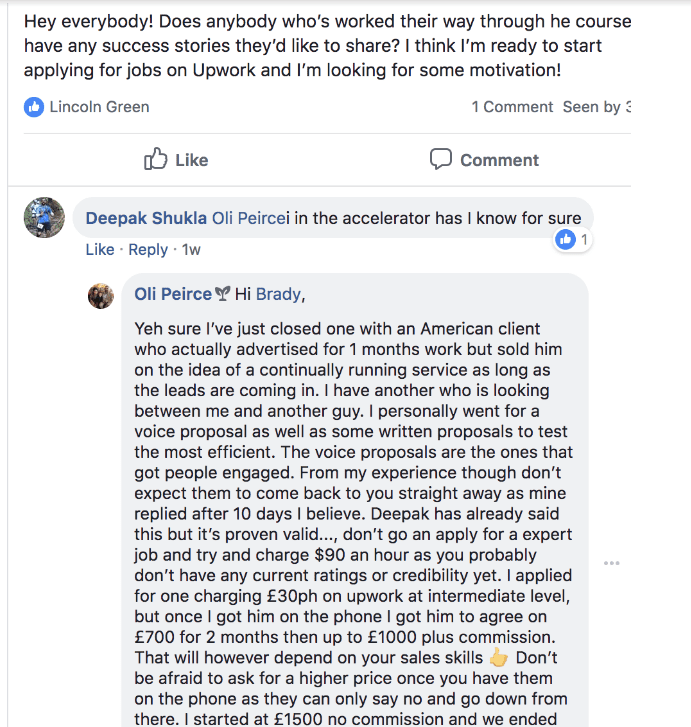 These are the stories of just three of my star pupils. You can find some more personal testimonials from those who have taken the course on my YouTube channel here. If you want to learn more, and sign up, you can do so here. And if you want to reach out, ask questions, chat about the course and what it might be able to do for you, by all means, do that too. I’d love to hear from you.