What a godsend it is to just block out social media and work on ‘deeper work’ as taken from the highly recommended ‘Deep Work’ by Cal Newport (thanks Zurab Kakabadze and Kevin Wimer) on this one.

Whilst I’m not going to segway into this book and what I make of it – I’ve got some immediate takeaways from it that I’ll come on to discuss (which relate to focus). 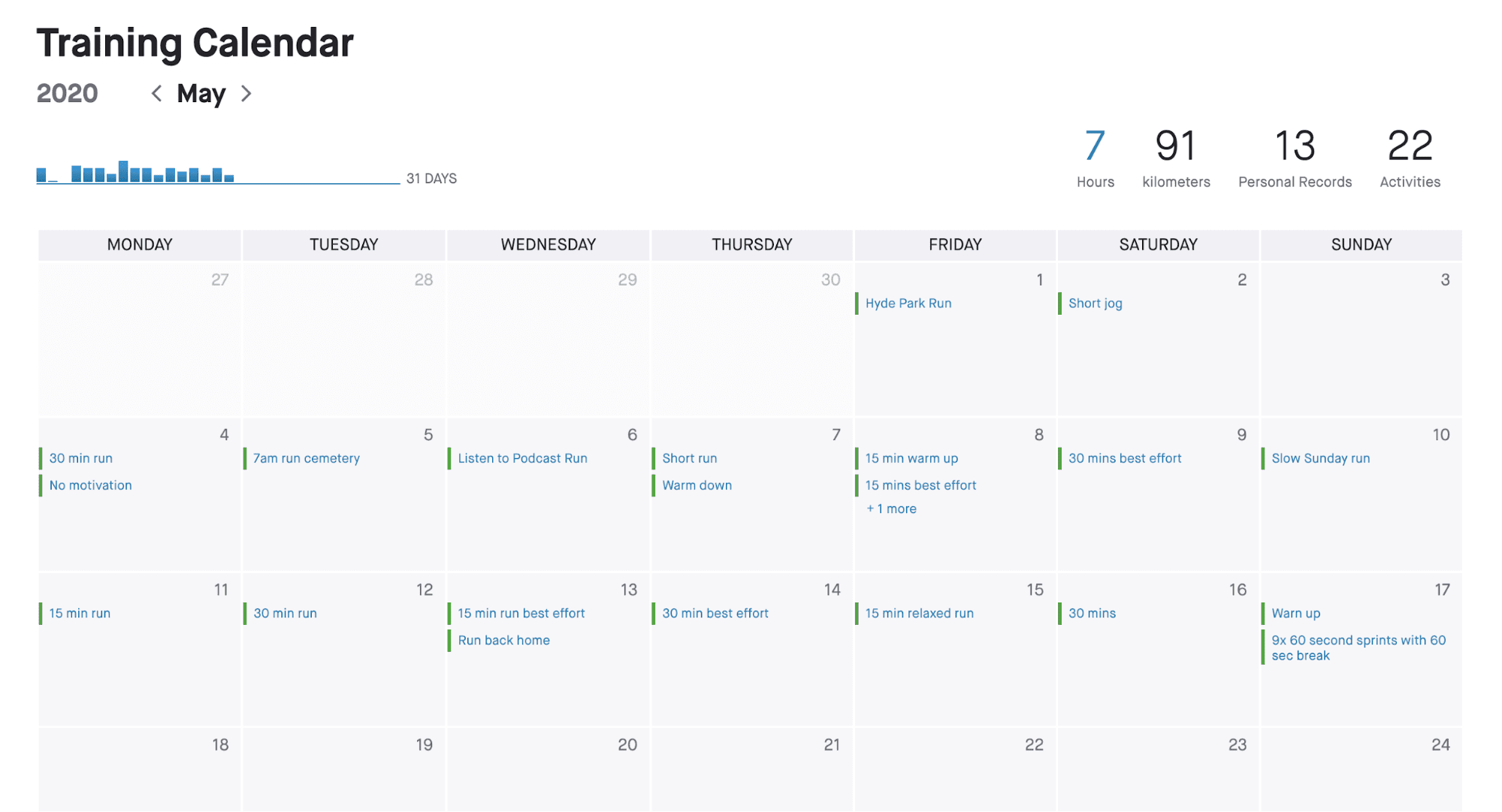 I first started using the app on April 26th where I started with a bang by running 23.67km in 2 hours.

Now this blog isn’t going to be about ‘fitness’ per-se – but I do want to walk you through some specific tactics that I’ve discovered and employ that hopefully can translate into your own training.

Something that I used to do very inconsistently was train.

I didn’t keep set times for my training schedule. It would be sporadic and there would be a lot of ‘wasted’ time around it.

Paring down decision making is something that James Clear alludes to in Atomic Habits and is also something anyone who has a limited reserve of will power focuses upon including into their own lives.

A good example of this NOT being used was today when I woke up at 930am – causing me to miss my morning run time.

The cognitive shift this caused led me to really consider whether I SHOULD or SHOULDN’T run.

So a process that ordinarily as has been over the last 14 days been a sub-conscious process – ok run at 7am, a minimum of 15 minutes and then do 200 repetitions in sets of 50 moved into a conscious process.

So even though I ran – today was both a BAD day as well as a good day for running – I’ll explain both in due course.

Yesterday my partner Daniela, decided before she studied that she would clean up the whole house (I was actually writing yesterday’s blog at this point).

It ended up being a 2-3 hour process and directly impacted her usual Saturday afternoon reserved for studying.

Not because she was doing anything else – but the mental strain of focusing upon tidying up the whole flat had zapped her willpower.

So what’s the lesson?

Cognitive load is the #1 killer of your runs.

It’s not your body fat, or diet or otherwise…it’s the barriers of resistance that come in the way of you actually running at the same time…every day.

Since I’ve begun putting exercise into my diary at 7am every day…I’ve seen my consistency improve dramatically.

As much as I can I try and do the reps on a daily basis.

How have I made such gains?

I put it into my diary and therefore because it’s in my diary it has to happen.

Here’s why – it’s much easier to adopt a good habit by stacking it alongside a habit that already exists.

Running an agency my diary is how I manage my time and conversations – and so by putting it into my diary my tendency to follow through increases significantly – and I’m currently on a 14-day run streak.

I’ve not done that in perhaps a year.

One Time Fixes That Lead To Life-Long Improvements

Strava (thank you Aarti Shukla!) has been a game-changer for me. I formerly used to use Map My Run but kept facing GPS issues with it so ultimately stopped using it.

It seems that Strava has no such problem and I’ve been able for the last 2-weeks to track all of my runs.

So look at one time improvements that could lead to big changes in your running career.

I’ve now bought a heart rate monitor that I want to start using on my runs to see how much more I can improve.

This can expand in all kinds of ways.

Determining a run route you enjoy, a time of day you enjoy running, having the right running gear and such changes will definitely increase the likelihood of you running consistently.

This again can come down to any way you choose to measure your runs.

Strava is what is working for me now and this market is actually designed for running measurement and I’ve scuppered myself somewhat by being so devoted to my own Casio watch.

Nonetheless, I’m trying to extend this monitoring now to other aspects of my life in a fashion that keeps a history.

If you’ve read any of my earlier blogs you’ll notice that I tracked via putting in a before and after watch.

This was crude and ultimately ineffective.

It takes up time and doesn’t keep a record unless I manually look at the history.

And as you know – ultimately will power fails you. 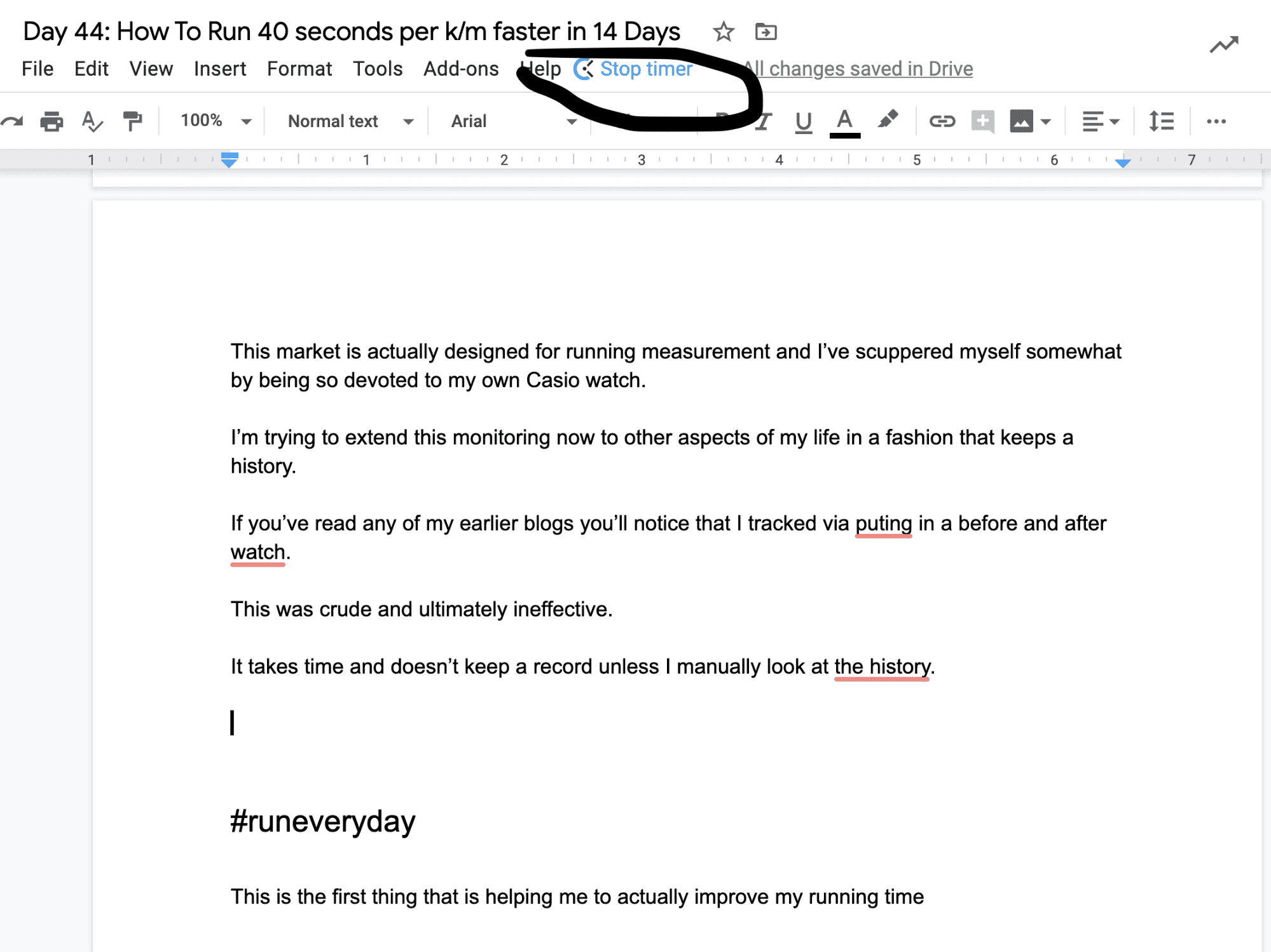 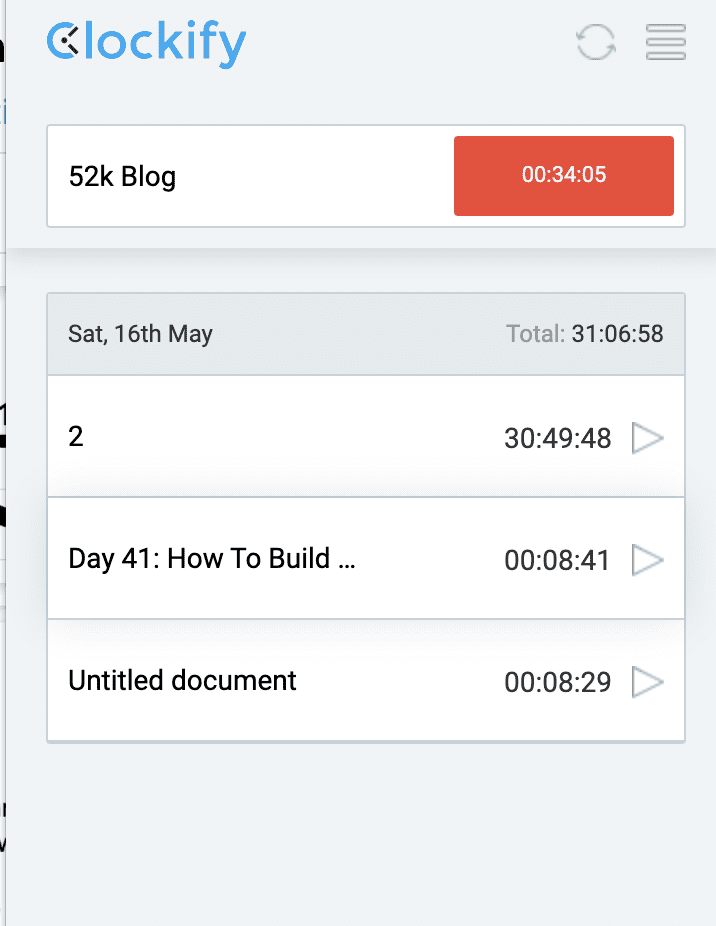 This way I’ll keep a history of the blogs and their outcome in a much easier fashion I can track over time and keep a historical record.

Hopefully I’ll use it consistently – but some record is better than no record.

Which leads us onto our next point.

Again something I learnt from James Clear helps shed light on something I’ve been told but never really understood.

The biggest key to success (with running and otherwise) is:

Keeping consistent even when it’s boring as hell

Running every day, or otherwise can get boring fast.

This can extend to anything and is something that relates to the challenge of consistency.

Those who maintain huge consistency tend to outdo everyone else.

Part of my success as an SEO agency owner (and I’ve heard this reiterated by Kevin Gibson who runs a 7-figure agency re:Signal) is that a fundamental of success is just by sticking at it.

Putting the work in, keep showing up – and in the agency space people will pretty much just get familiar with your name and who you are. And assuming you do a good job – winning work will follow.

This translates to every arena of your life – that consistency (e.g running everyday) is much more likely to generate you favourable results rather than bursts of intense activity

And this sounds simple but is actually a hard thing to do.

We’ve been wired to work in sprints

The challenge with our academic system

I’m not used to working consistently.

I learnt pretty early on during my secondary education (so from 14 years old and onwards) that the only thing that really mattered was exams.

It was exam passes that earn you merit in the world.

Getting an ‘A’ grade is the most valuable form of currency – more so than working ability in the subject in fact is.

Furthermore, it seems that to achieve academic excellence you must work for hundreds of ours more to get a result that is 5-15% better but is unlikely to yield discernibly different results in your career.

It is more practical then to cost through your academic education and work in bursts through exam periods to pass with good grades and resume coasting (i.e working as shallow as possible to get the best results).

I’ve not researched this by the way – but I AM referring to my own academic education and how I ‘gamed it’.

I’d learn fast, get my grade and immediately forget. My downtime was spent in the gym (trying to look good) and with friends (feeling good).

So this was what I learnt was the pathway to success…basically try and ‘game the system’.

Our Careers And Working In Sprints

For many people that type of activity translates directly into the workplace because everything becomes about ‘time economy’.

How can I leverage the best results working the least hours.

Multi-million £ businesses have been based off of a cram.

And had I been more intentional and thoughtful about the process I’d be running a 7-figure agency niched down in one area by now.

This is what I’m often told is the key to success in my industry.

‘Niching’ – just another word for focusing.

Instead, I’ve spread my focus, been far from consistent and have been a talented but ultimately mediocre performer for much of my life

I know guys that come to their first marathon and break 3 hours.

So how did they do it? And what have I discovered that has helped me run consistently better almost every other day?

Something Is Better Than Nothing

Turning up is the biggest challenge. Especially on your off days, when you don’t feel like running and would rather stay home.

It’s the ‘all or nothing’ approach to exercise that pervades our culture that’s the problem.

You don’t need to run 5 miles every day.

But if you want to succeed you NEED to do something.

That for me has been a big realisation with running.

Well those are the most important days.

For a few good reasons –

You may surprise yourself and have a great session. For me today I went out and did my 200 reps first and added in 50 more static squats and THEN did 10x 60 second sprints with a 60 second break per sprint.

So it ended up being a relatively decent session.

However – more often than not it’ll end up being a shitty session – where I run maybe half a km and do 30 repetitions.

And by still…putting on your running shoes, walking out the door, starting to run – what you’re actually building is repetition and routine.

This is what will see you to success – this habit formation that’ll make sure you keep training day in and day out – and ultimately outlast your competition.

This reinforces the neural pathways in your brain and leads to such activities – the days or moments when you don’t feel like running – moving to the subconscious level.

Because there will always be days where something disrupts the pattern.

Two days ago I stopped running because I strained my thigh and decided not to do my 200 reps.

I ended up coming to my flat entrance, getting inside the door at the ground floor (we’re 3 floors up) and doing 50 pushups and 30 situps and 10 static squats.

It was damn hard, but I left a happier man – because still I did something.

And moments like that build up your reserve for the days it rains, it’s cold or otherwise.

And now by virtue of this – my approach has shifted. I recently hit 4.07 per km over 30 minutes. This has happened simply because I cannot but want to try and compete against myself. 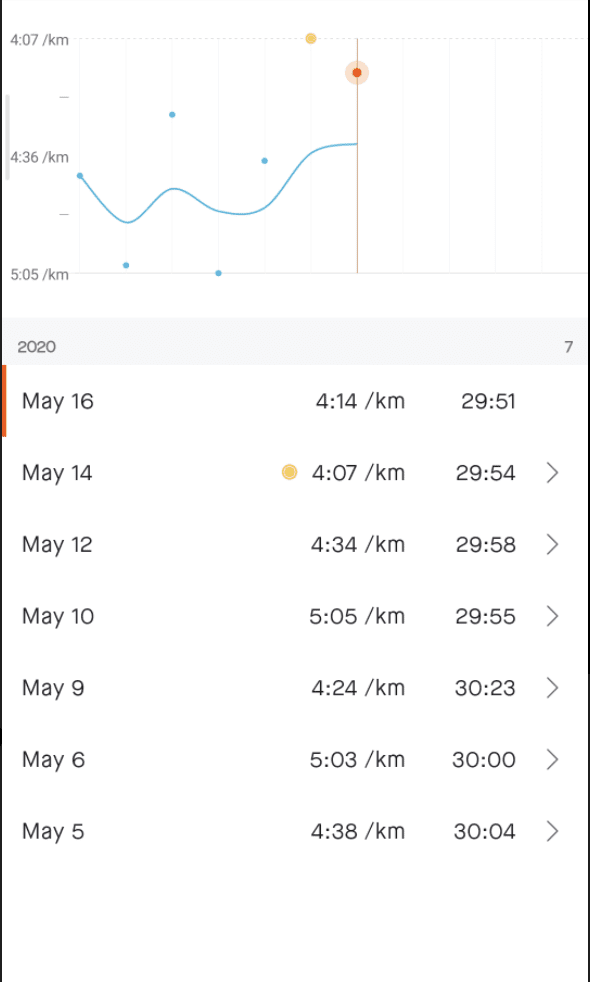 This has all happened because of the act of installing Strava,

I’ve taken this one step further and now invested in a heart rate monitor for my runs.

I’m going to simply start measuring my heart rate when I run to observe – and observation naturally will lead to my desire to improve.

I made no mention of interval training and how to pace your runs or otherwise here.

Because the fundamentals of becoming an excellent runner are grounded in building powerful routines that’ll open up the opportunity for you to become a disciplined runner.

As soon as I let go of my goals of ‘I will run X marathons this year’ which is all what 2019 was about (I ran 8 marathons and 3 ultra’s) and shifted it to ‘I’m an athlete’ – it led me to focusing my goals based upon the kind of person I want to be.

And for me that’s someone who trains hard for 30 minutes every day no matter what.

Feel free to keep me accountable by following me on Strava

And meanwhile – what kind of person are you trying to be?

: life
Previous Post Why l Deleted All My Social Media Apps (Day 43) Next Post I’m Going To Give Up Watching TV For One Month (Day 45) 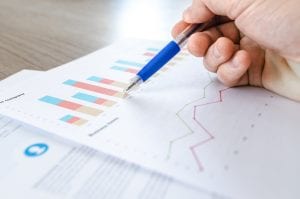 My Huge Failures In Trying To Build My Agency (Day 8) 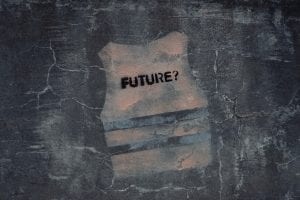 The Future Of Pearl Lemon (Day 2) 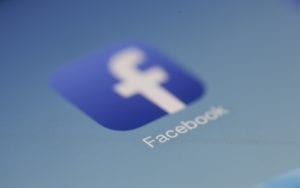