I’ve always been massively into fitness.

What I mean by that is the marathons, ultramarathons, and more that I’ve done. Right now at aged 33 – I’m probably living the most sedentary lifestyle I have lived in many years – and I’m training 3x a week to move into amateur boxing.

However, I want to walk through some of the changes I’ve made over the last 6 months of my life thanks to Scott Henderson, Amir Bormand, Daniela Colognesi, Patricia X, and more.

One of the critical things for me is in relation to making incremental changes.

I want to walk you through some of the poignant moments that have happened over the last several months: 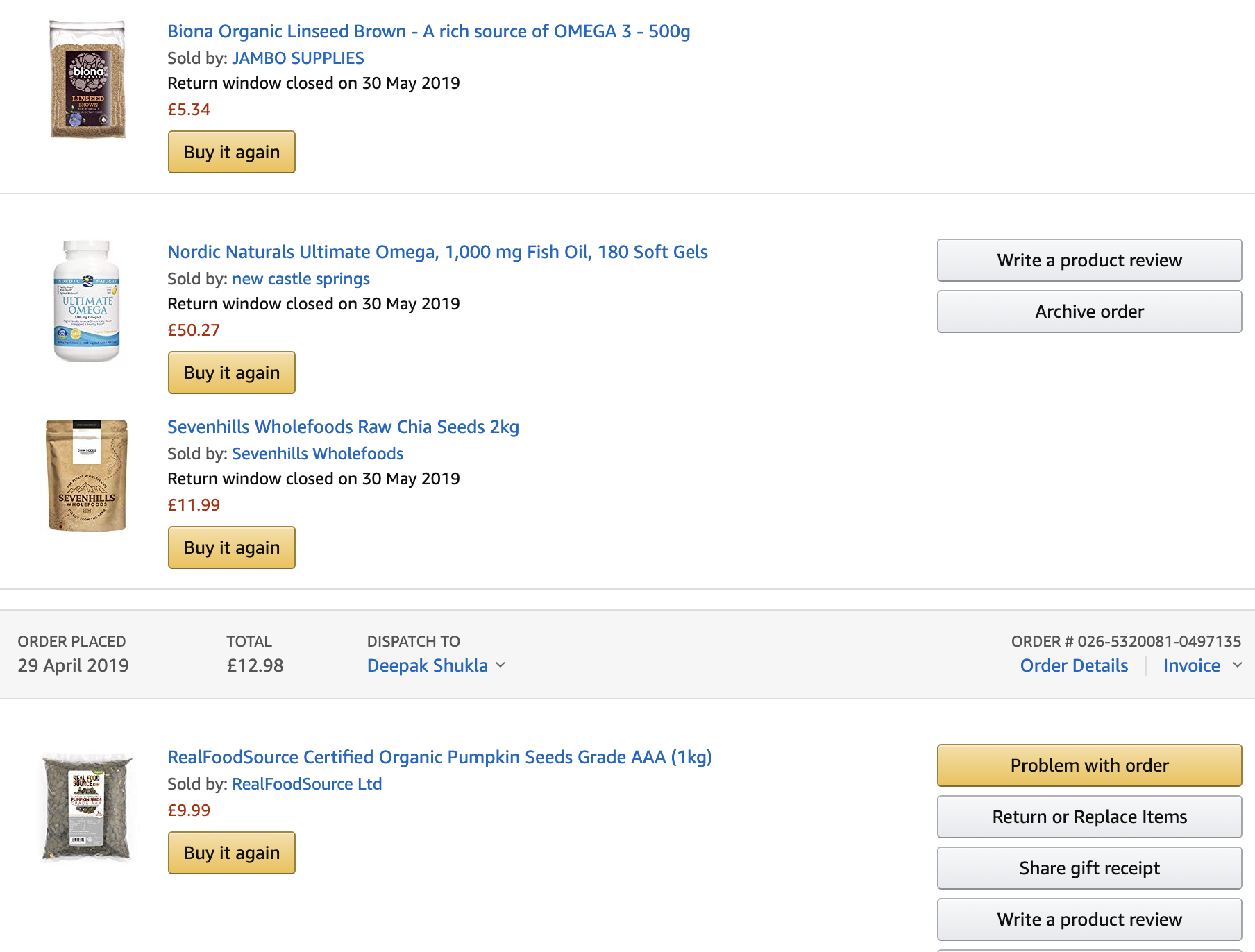 This again has come from Scott Henderson. And Daniela has played a strong supporting act – but in my cupboard, at home, you’ll find a variety of nuts and seeds.

My dad is actually heavily into this stuff and will soak almonds the night before and then eat them in the morning.

He’s 63, trains for an hour each day, and is in great shape so he does know what he’s doing.

When I had my ‘moment’ of inspiration I took to Amazon and just spent a bunch of money buying a variety of seeds which have been:

I had a WhatsApp exchange with Amir on the 18th July 2019 which he told me how giving up coffee had changed his life.

He felt superior levels of focus, felt that he slept better and that his short term memory had improved…..

This was enough for me and I blurted out – f*ck it – I’m going to give up coffee as well. I seized the moment of inspiration he had provided me and decided there would be no turning back.

It’s now coming up to the 7th-month mark and I’ve still not had a cup of coffee.

Scott Henderson got me to increase the amount of water that I drink each day. I now do a minimum of 1.5 litres and have been doing so since around October 21st, 2019.

Again this came as a consequence of the various conversations Scott and I have had. He’s a PT, ex-squaddie as well as a police officer – and in the last few years he’s become way more interested in nutrition – so this is where the simple water intake comes from

I can say that since I’ve increased the amount of water I drink – I get fewer headaches, my skin looks better, and have a more balanced sense of mind.

I recently watched Dark Water – you need to watch it and read up on history. Simply put there are more chemicals than any one of us are aware of that float through our drinking water from the taps (of London at least where I live)

Given I’ve been steadily guzzling 1.5 litres since around October – Daniela alerted me to the fact that simply – water from the taps is filled with all kinds of treated chemicals – so bottled water as a rule of thumb (and ideally glass bottles) is much healthier.

This blog supports the notion that there are lots of chemicals in the water so best to drink less of it.

I went to an amazing event by these guys about a ‘gut-based diet’ and actually had my mind blown.

It focuses upon the whole connection between mind-body-spirit and how they should not be seen as separate systems but in fact, are all connected.

I took a boatload of notes at this event but there are some fundamentals I’ll share with you:

Food processing includes anything that changes a food’s original form.

When you change a food’s original form you basically destroy many of their main properties.

Imagine taking a football and mangling it up into a tennis ball.

Throw out parts of it, reduce the size, adjust the colouring – test to see how it bounces – oh it doesn’t bounce enough let’s add a little bit of something else to it.

And then after all of that – you still call it a football OR a tennis ball….

And proclaim it has the same ‘density/size/etc’ of each of them.

When in fact it’s neither – the properties of both have been warped, reduced and other stuff has been added..

So in short – reducing processed food consumption is going to be part of the next new journey for me.

I watched Game Changers on Netflix and it made me realise how much rubbish there is in cow’s milk.

I watched 15-20 minutes of it and it was absolutely horrible.

In combination with this, I spoke to my cousin Shiva and he told me the 20% of milk is pus or something close because of the number of antibiotics and growth hormones they give to cows (especially in the US if I understand correctly).

Since then I’ve stopped buying cows milk and Daniela has introduced me to the range of milk alternatives you can get such as Almond and Coconut milk – which is all you can see in our household as of Dec 2019.

I’m pretty good with sugar already – I don’t add any in any of my drinks – tend to only drink water when I train and stay away from Lucozade and anything with added sweeteners.

My current vices have been a bag of grapes a day (for a few years now) as well as hot chocolates.

Since going to this event run by Patricia Lopez I learned more about the dirty dozen as well as following on (via a random guy in the queue at Costa) about sugar being the biggest killer of humans.

This coupled with Daniela deciding that she eats too much sugar and deciding to detox/reduce her sugar intake meant I followed her into this journey.

I’m now moving into half a bag per day of grapes, 1 hot-chocolate per day or less and ice-cream 2x per week in a bid to slowly kill sugar from my diet.

Since watching The Game Changers I’ve discovered also how much crap is put into meat in general. Alongside watching the documentary mentioned above I did ‘try’ for a week or so to become vegan.

Where I did settle upon though is to stop buying pork (I did love sausages and would have them 1-3x a week) as well as beef burgers (I’d have them 1x a week also).

That has immediately cut down the amount of meat I eat.

I continue to each chicken and fish (in the home) and outside of the home, I’ll eat beef from time to time (usually via spaghetti bolognaise).

But the whole emphasis is on meat reduction and management in this case.

I could continue with the series of changes I’ve made over time but the whole principle of introducing a series of sweeping transformations into your life is focussing on consistently small but important changes.

And together they build a lot of momentum.

TWO – Kick Coffee (I still do)

FIVE – Processed foods (I still do)

Anything else that’s new since that time?

It’s extremely interesting looking back on this – happy that for the most part, my habits have remained intact and moreover – they’ve become normal.

I actually forgot all these changes have been made – and that’s when you know things have moved from the active conscious part of your mind – to the subconscious.

It’s ultimately about the one’s that stick – and no one sticks 100% – so it’s about going all out – and then seeing what sticks over time ;P